A collection of large-scale paintings by fourth-year BFA students, Living, Painting explores ideas of the human experience through paintings from their third year. The paintings contain themes that are intimate and personal such as ideas around memory, states of being, interests in performance, and insecurities, yet the large-scale nature of the paintings makes them difficult to ignore, immersing the viewer in the full view of the works. The representational forms utilized in the work speak to our own human presence through the bodies and landscapes presented, as if we could place ourselves somewhere in the compositions whether through the gaze of a landscape or in the pose of the figures.

Living, Painting is a deep dive into the artists' personal narratives, transferring a lived experience into a concept, then into a photographic image, then ultimately into a painting. The collective of paintings speaks to the action of painting as a tool of reflection on our ongoing process and lives; an action that involves planning, imagining, cropping, and abstracting imagery to expand upon the initial images taken before the piece is transferred onto the canvas. Yet, even beyond our own experiences, Living, Painting speaks to the painting itself as an object. Though the paintings are influenced by crucial past experiences, they themselves are revealed in the present, each with their own ongoing, lived, experience and a history of its own. 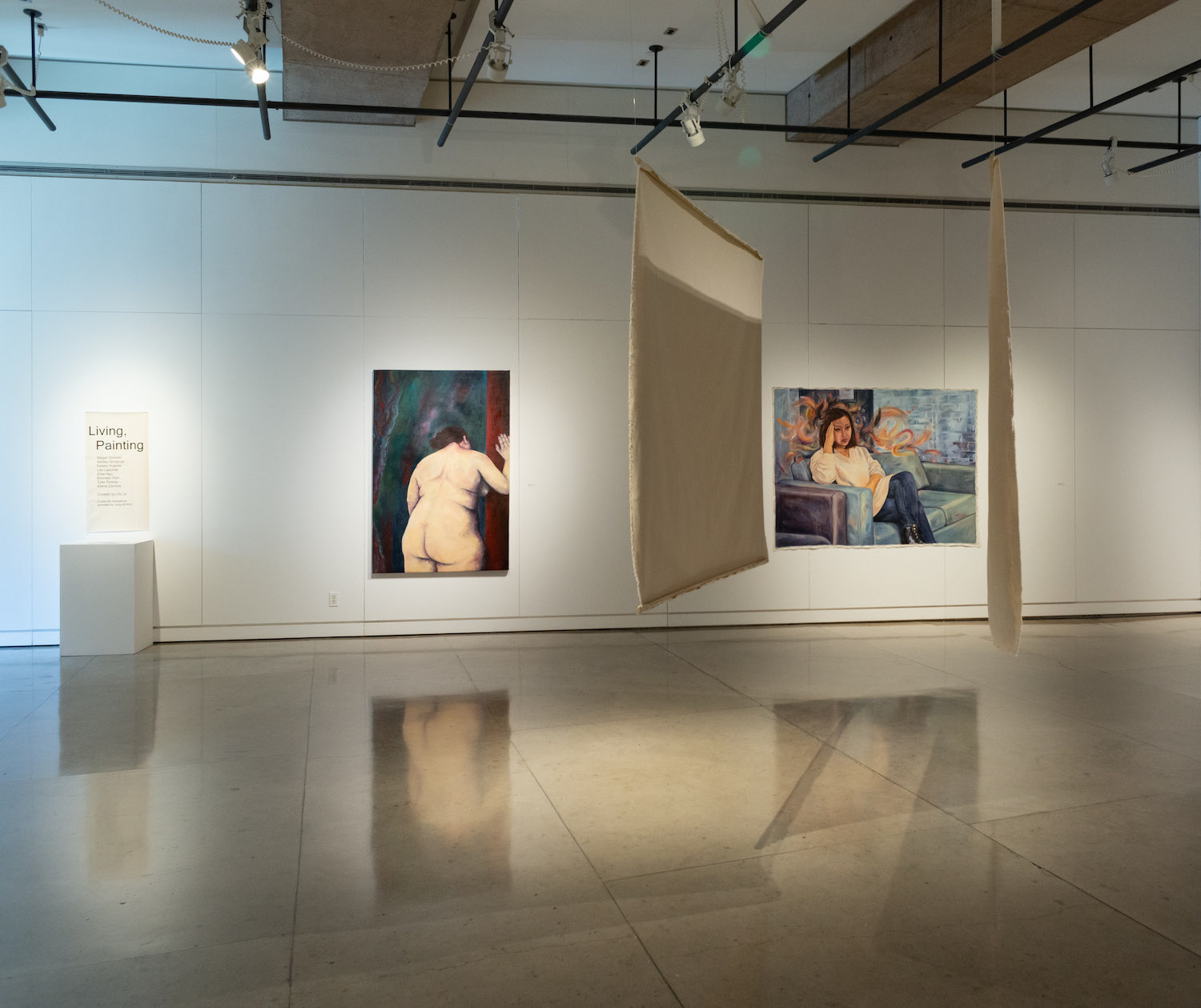 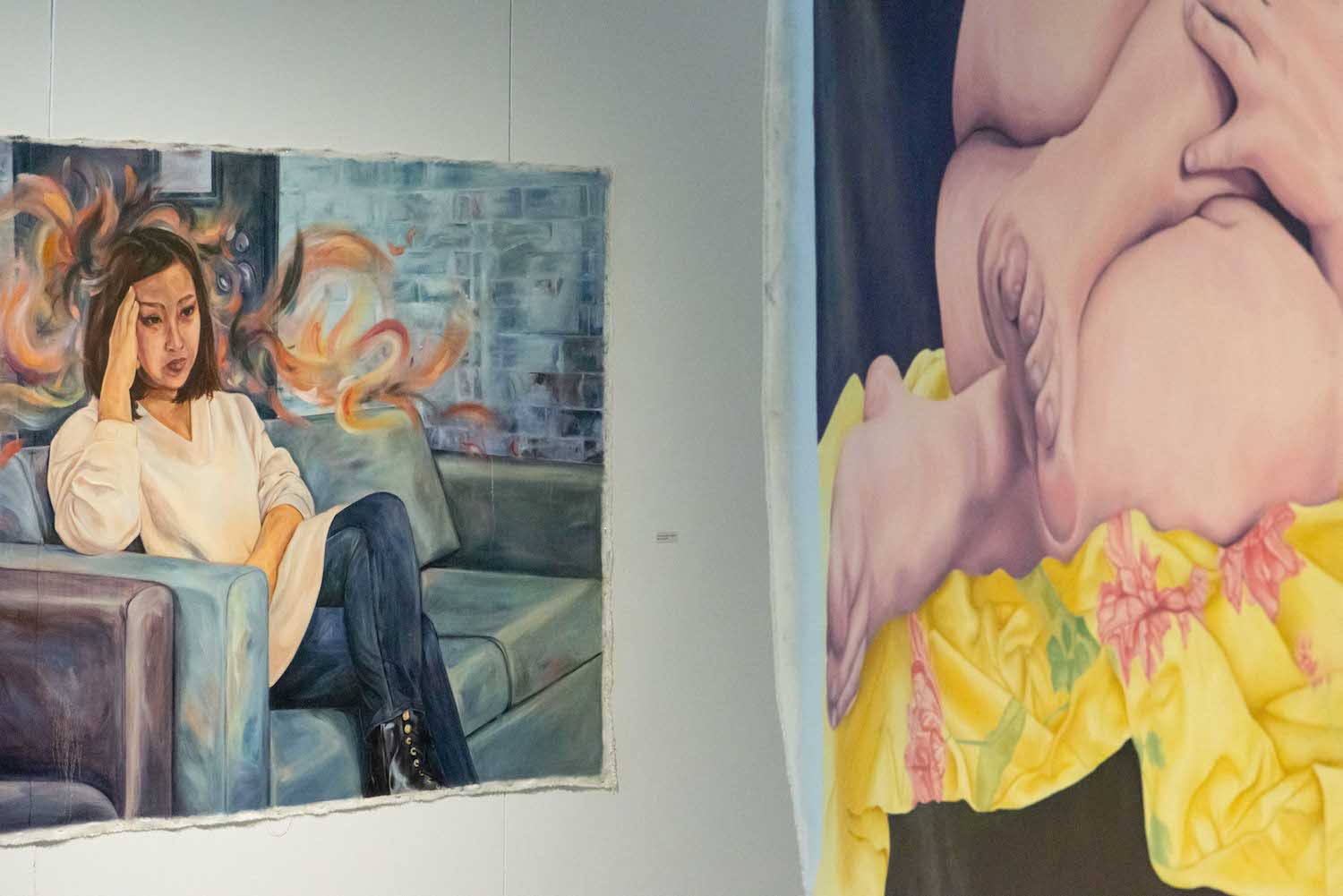 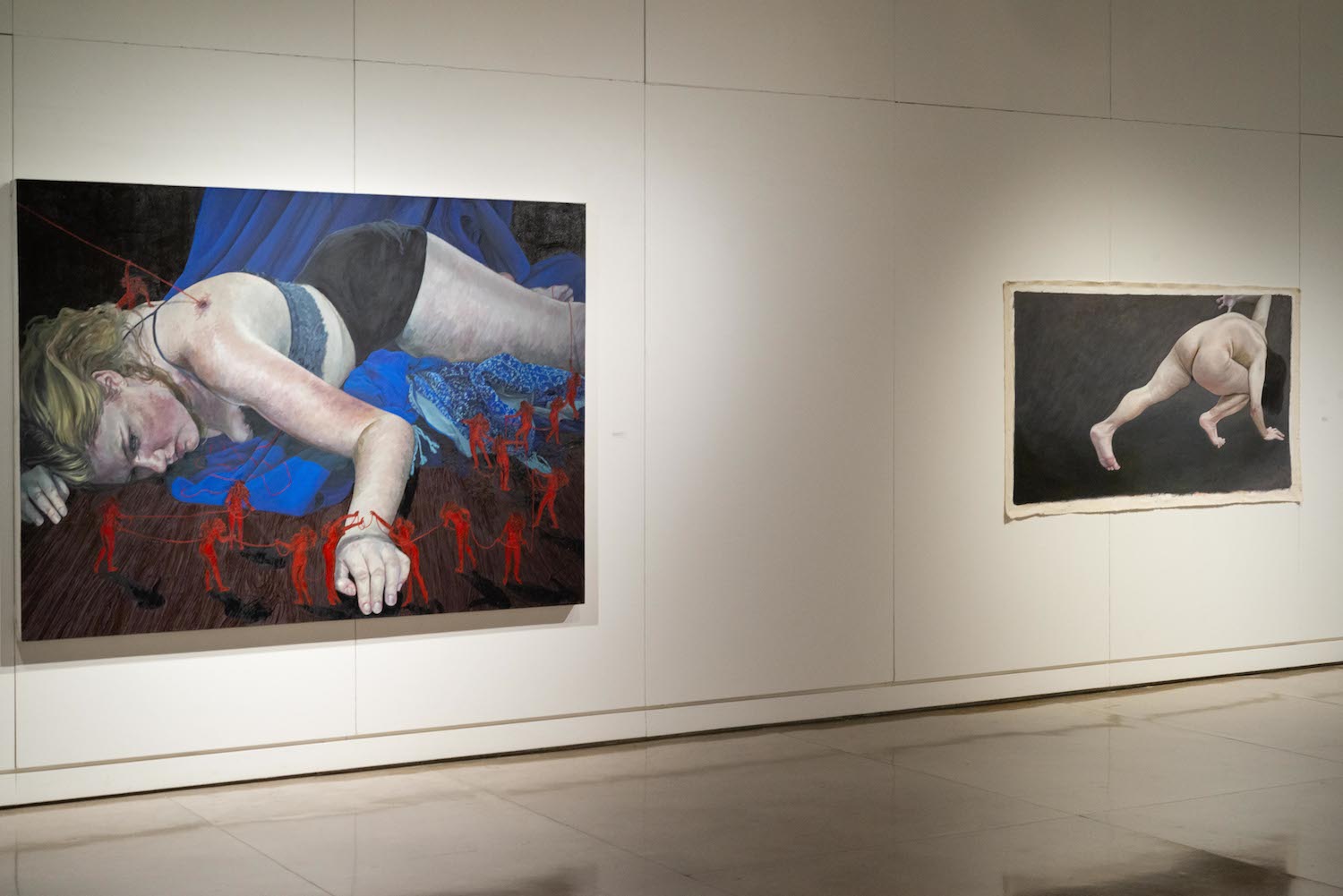 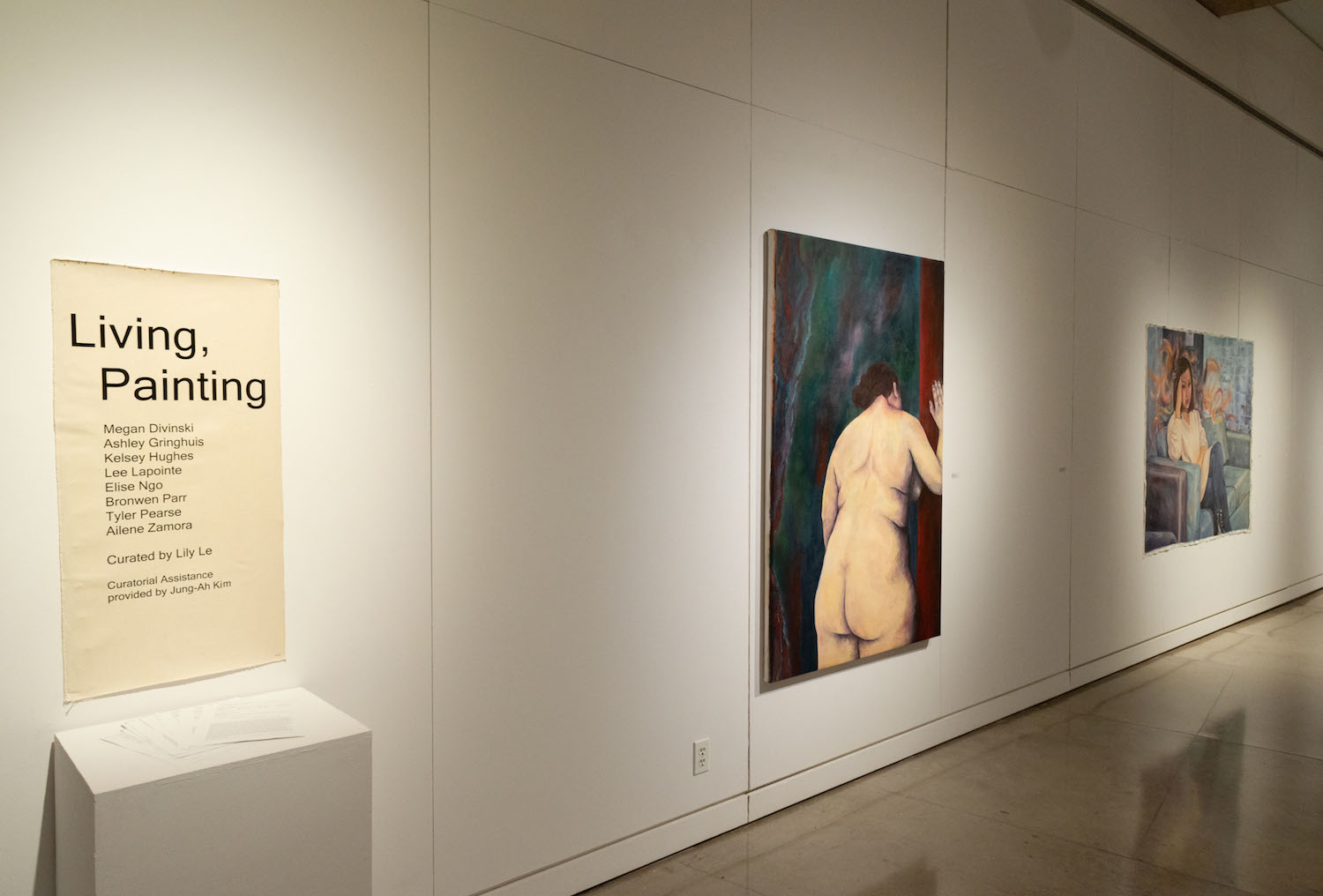 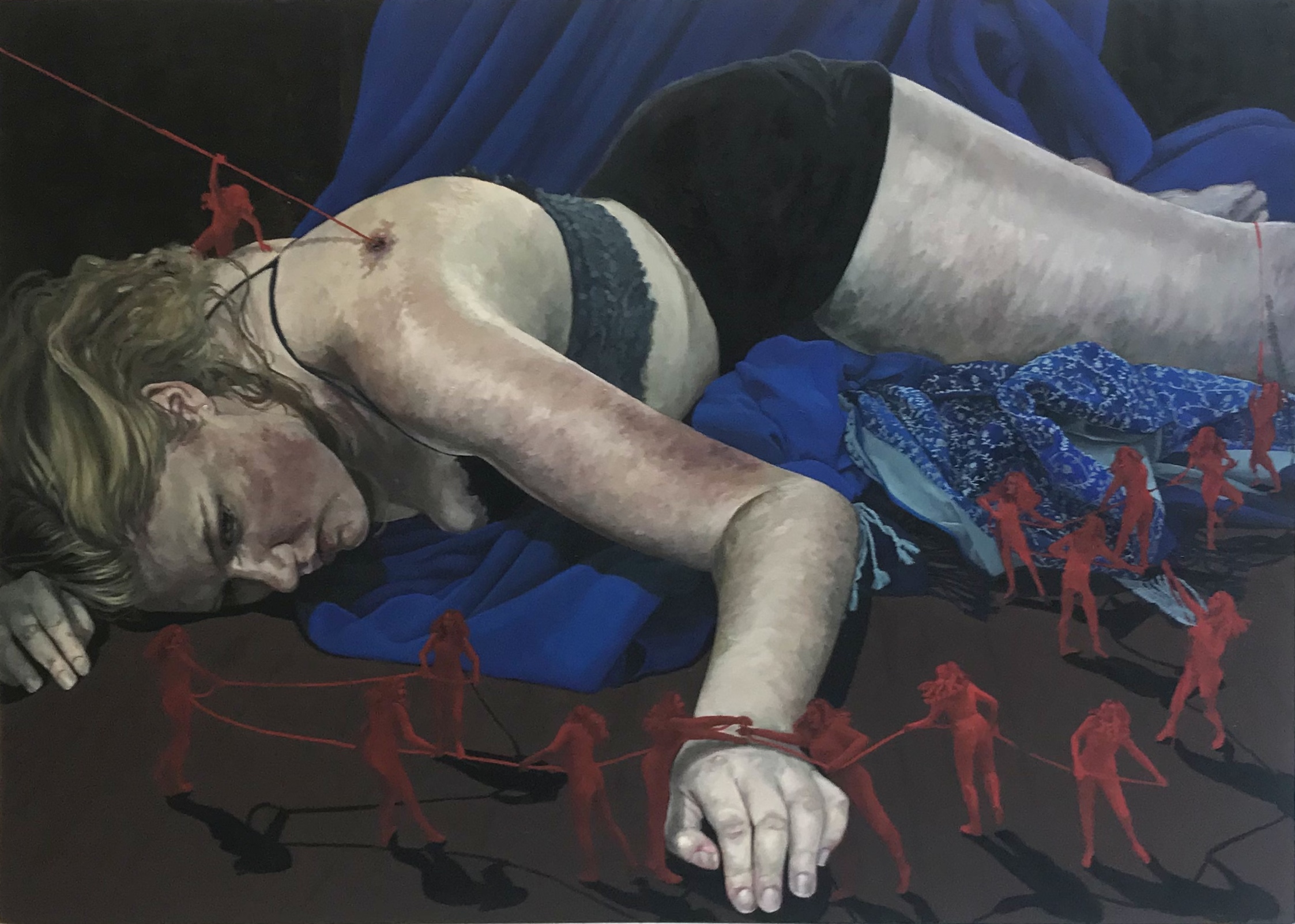 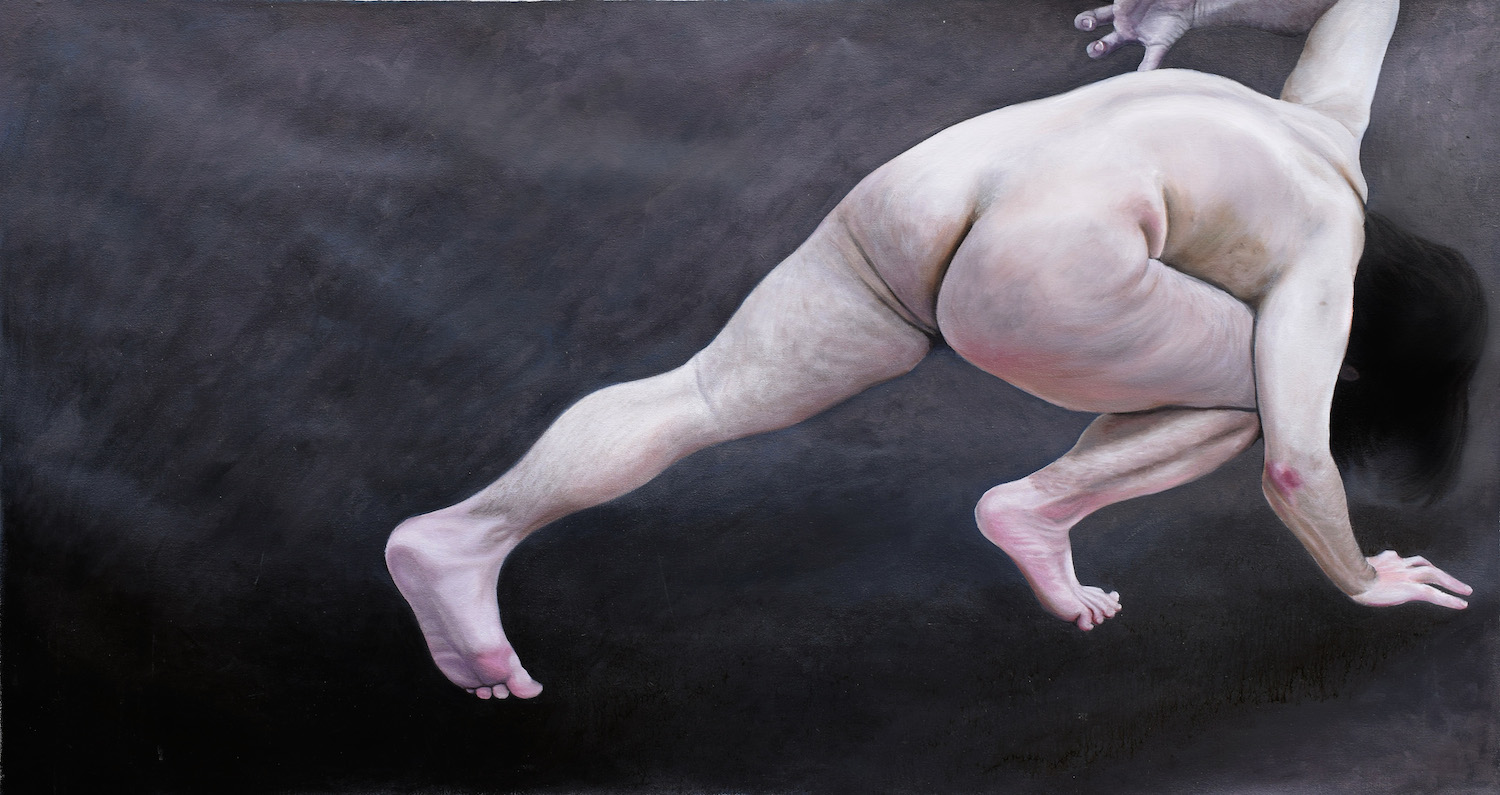 Elise Ngo
Everything and Nothing
2020
Oil on canvas
Photo: Chris Miner 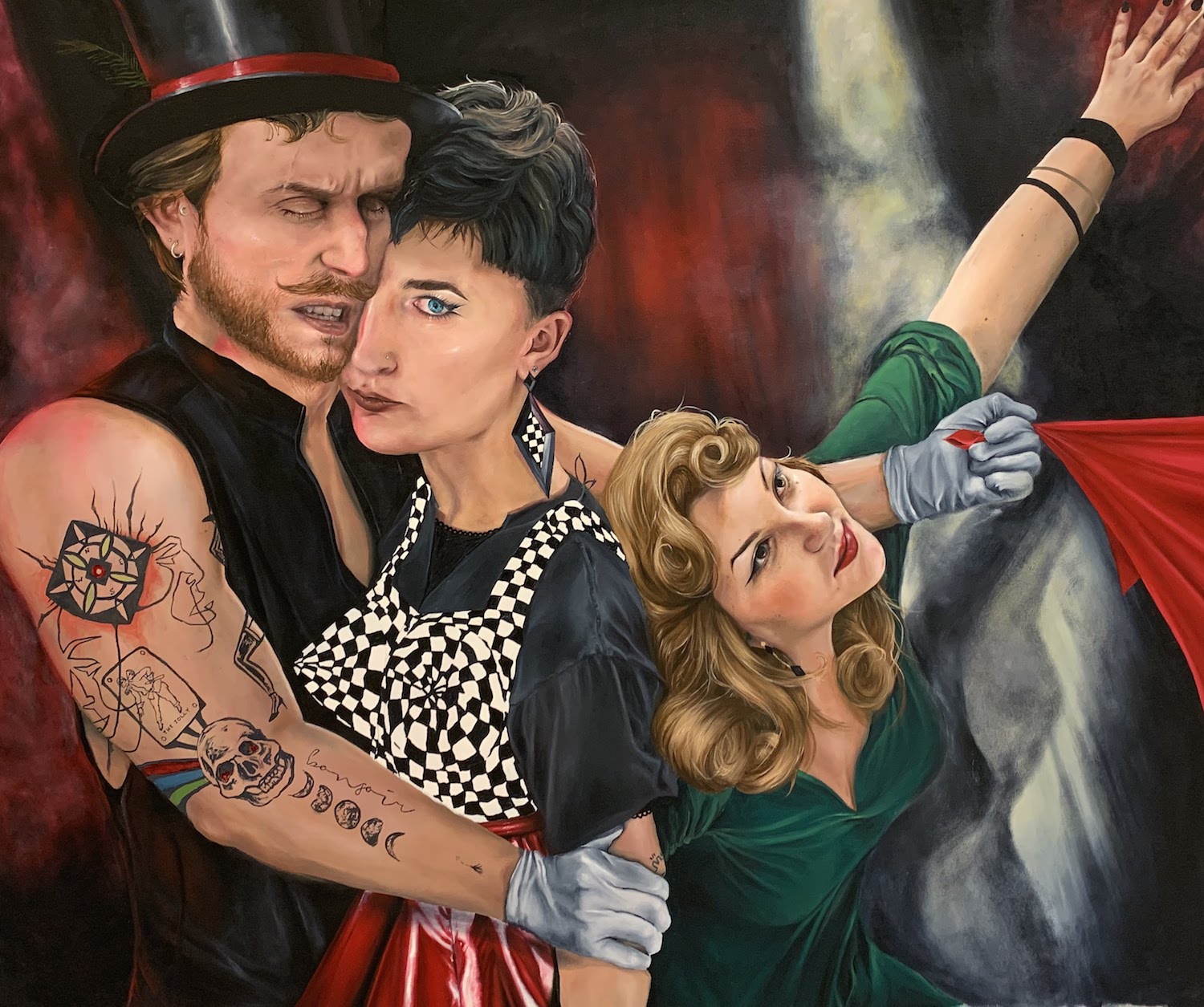 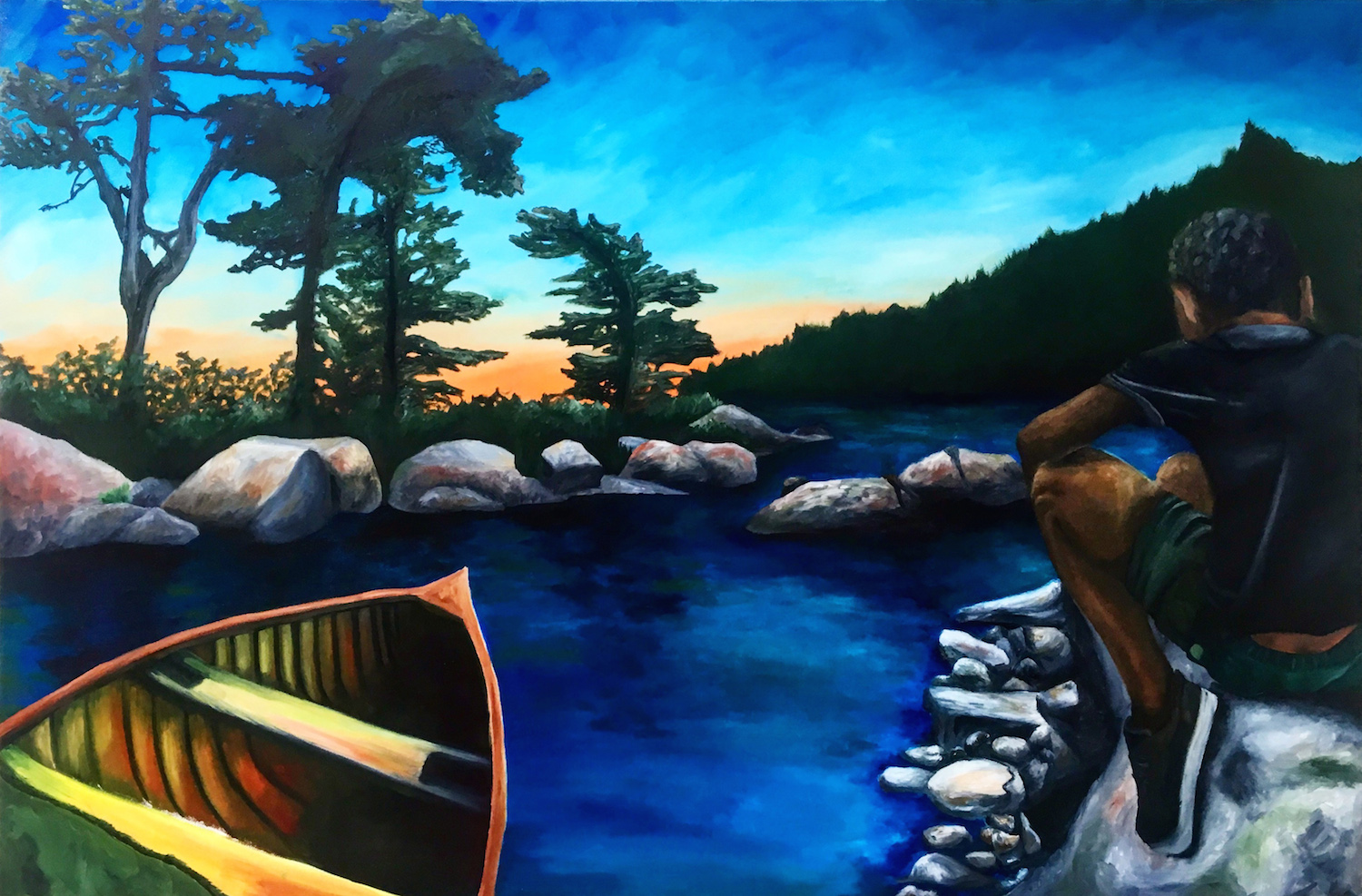 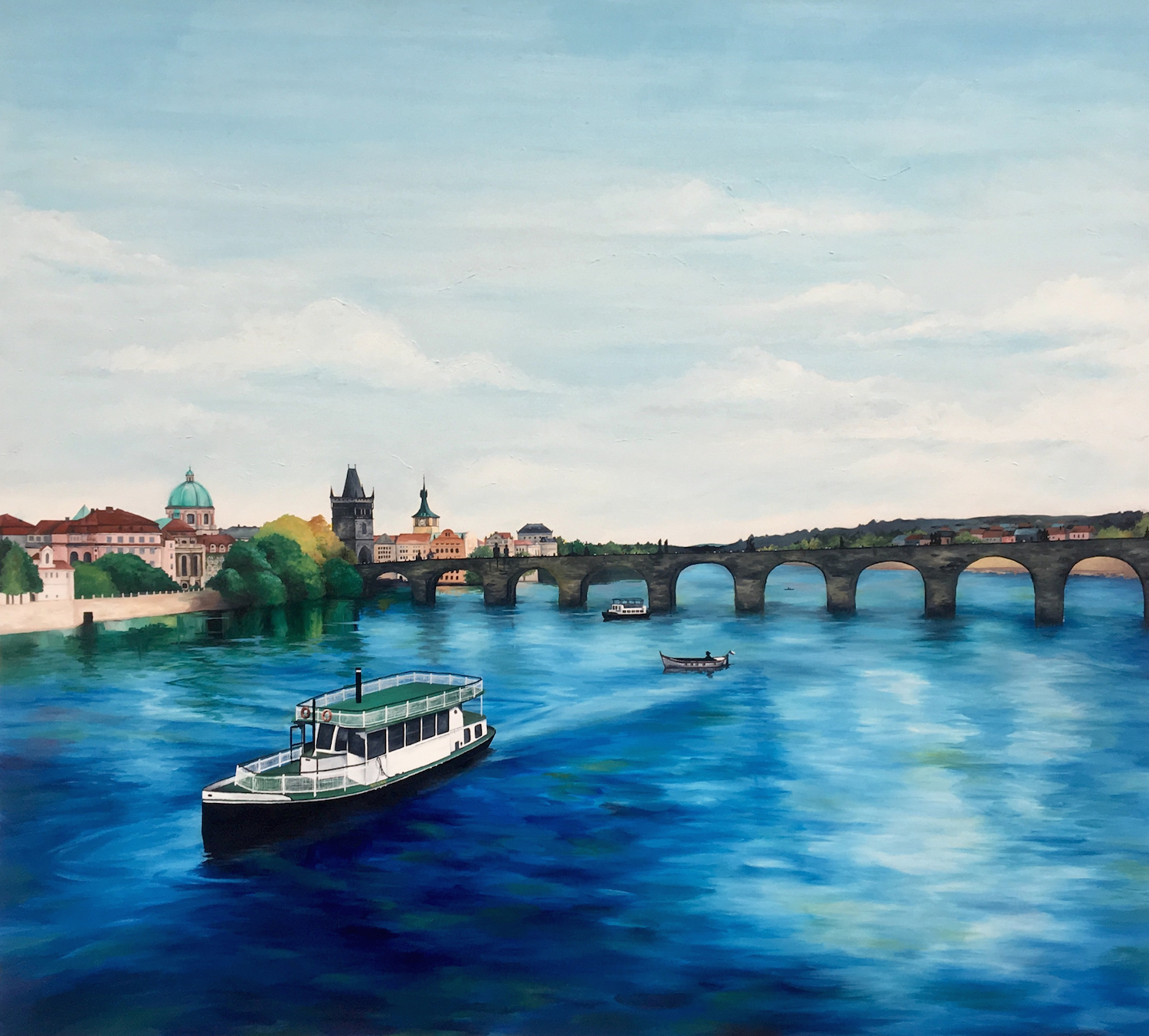 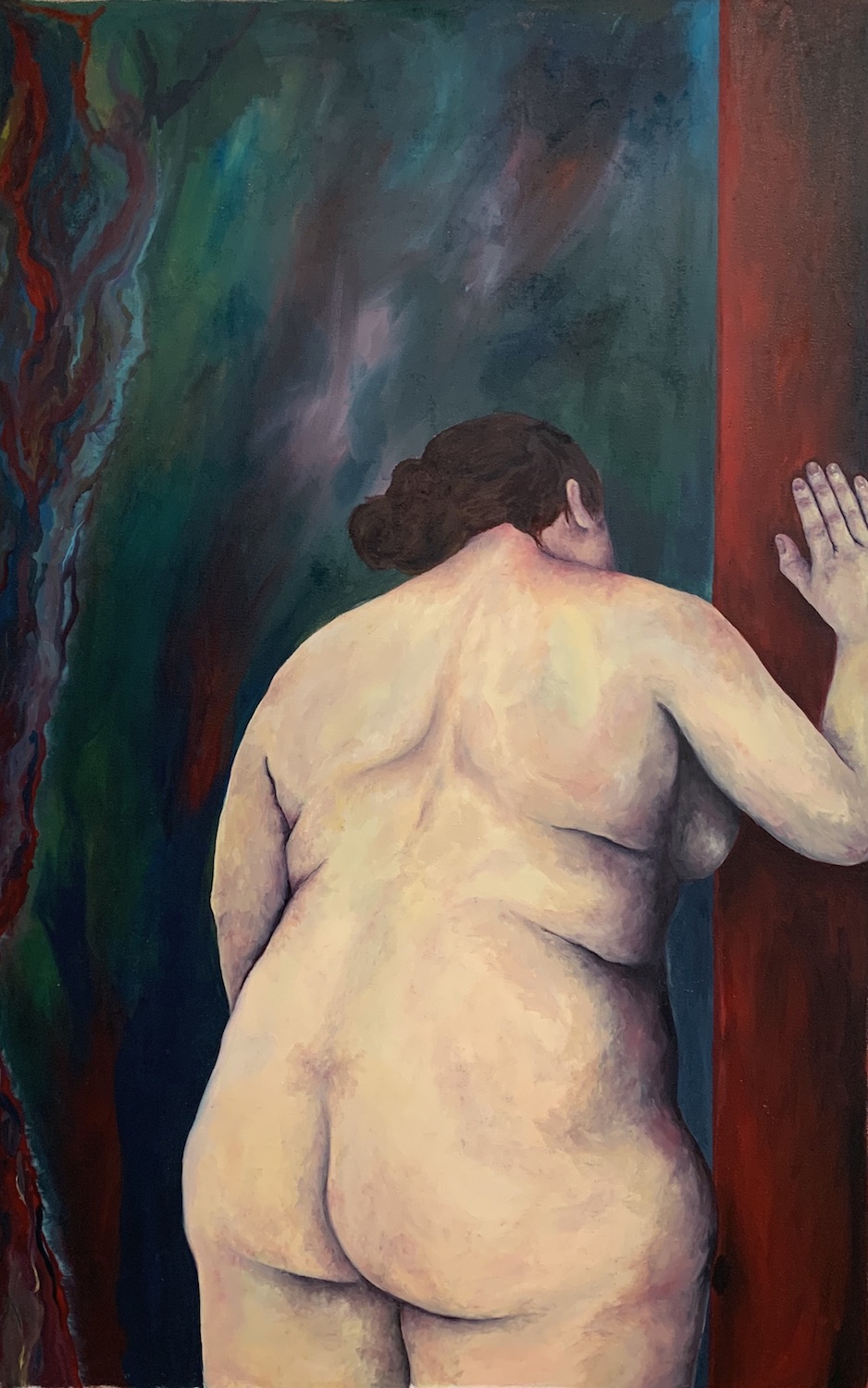 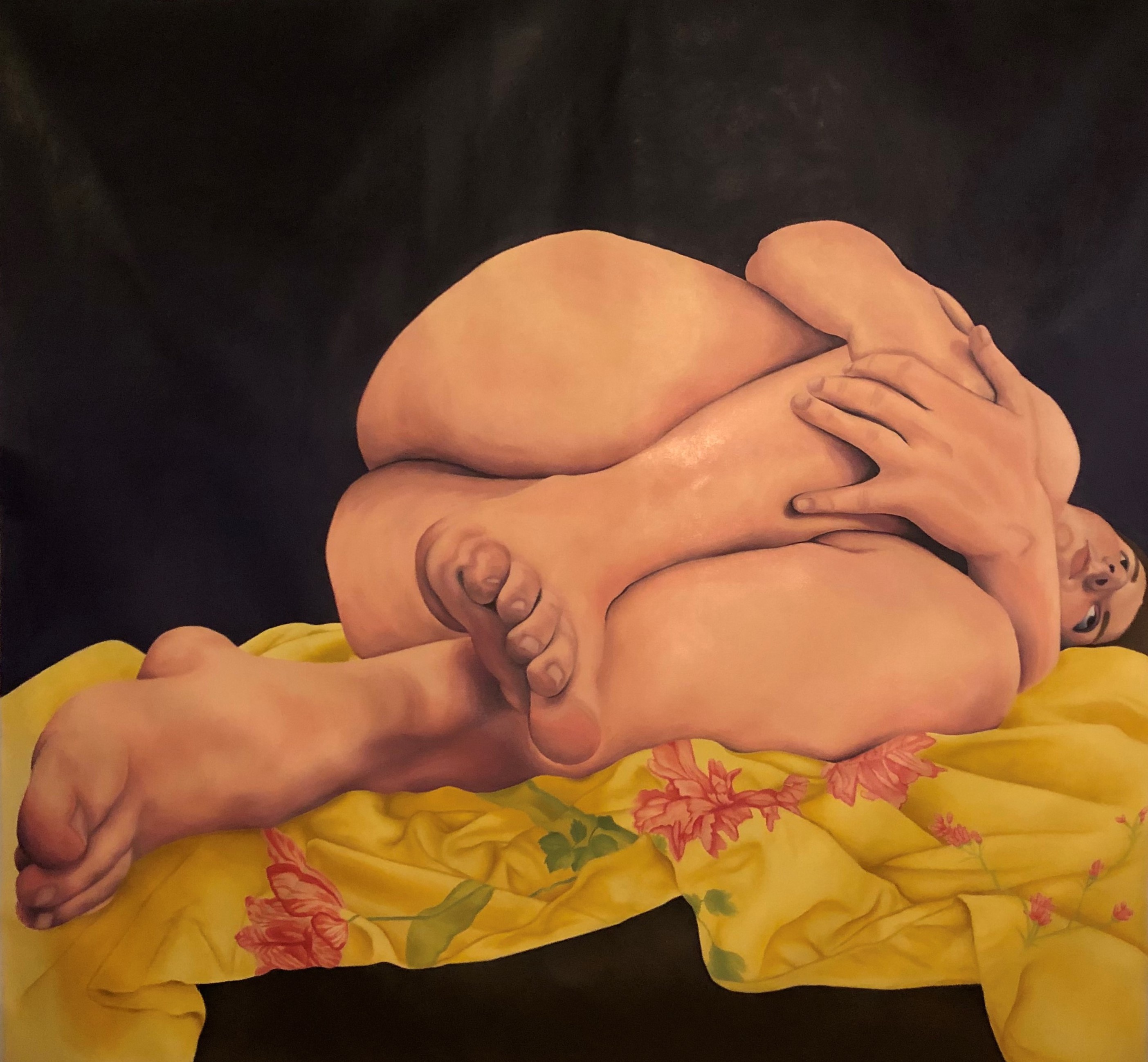 Bonsoir explores the drama, choreography, costume, and lighting used in performance and theatre. Divinski's paintings are tableaus of dynamic moments in fictional performances that have been created by piecing together poses, costumes, lighting, and set pieces to create the final piece. The feeling of spectacle is seen in her work through the incorporation of things that she associates with the experience of seeing a show or performance. Her work is inspired by the performances by burlesque dancers, drag performers, jazz musical-theatre, and European cabaret.

Megan Divinski is a painter in her fourth year of the Queen's University Fine Art Program. Her work aims to explore the drama, choreography, costume, and lighting used in performance and theatre.

Unravelling explores ideas of existence and what this means to an individual as they navigate the world and attempt to live within it. By using self-portraiture, Ashley hopes to relate her own experiences of confusion and anxiety within the world to broader and more universal ideas of existentialism. She hopes to look at not only her position in the world and relationships but also what it means to leave a lasting impact. By using symbolism and whimsy, she hopes to create images that don't speak to a darker undertone right away, but eases the viewer into these ideas.

Ashley Gringhuis is a painter and printmaker in her fourth year of the Fine Art program at Queen's University. In her work she focuses on the complexities of life, relationships, and the anxiety comes along with it. She has previously exhibited at the Union Gallery.

Discomfort discusses the topic of body image and how it specifically affects Hughes herself. She wants to show how negative body image consumes herself. Her work aims to express the constant anxiety created by her own perception of herself and by how others would perceive her. She feels as though their eyes are always on her and that she is always being judged. This is why she decided to portray herself in the nude, in a curled up position to hide her body from the viewer, obscuring parts of her body that she is the least comfortable with.

Kelsey Hughes is a visual artist currently in her fourth year of the Fine Art program at Queen's University. Her work focuses on the topic of body image and how it specifically affects her. She wants to show the negative side of the thoughts and feelings that result from the perception she has of her own body.

Selfportrait (at odds) explores Lapointe's ambiguous relationship to his own body as a source of himself, using his own image. By depicting his own body, Lapointe seeks to portray the gap between his own perception of himself and how others would see him, or at least how he thinks others would see him. Lapointe grapples with the contradiction of trying to represent his own subjectivity through a representation viewed by others. The work questions how an image can be an "authentic" vision of the artist when it is consciously constructed for others' consumption. Is his underlying desire an ideal way of being perceived or understood by others, and purely an exercise in narcissism?

Lee Lapointe is a visual artist in the fourth year of the Queen's Fine Art program, working primarily in painting, sculpture, and installation. Lapointe is concerned with consciousness, embodiment, and the self, examining dichotomous concepts like mind and body, self and other, and interior and exterior worlds to navigate experiences and states of being in flux.

This self-portrait is a look inwards to the act of overthinking, a personal bad habit. A gaze fixated on something (or maybe nothing) in the distance reflects a fixation on details present only in the mind. These thoughts, represented by vivid, swirling, gestural strokes, threaten to overwhelm. Immediate and frontal, they drown out what is truly present as the muted colours of the surroundings fade out of focus. This piece explores that frustrating feeling of going in circles, lost in a never-ending mental cycle yet somehow not really thinking about anything at all.

Elise Ngo is a visual artist currently in her fourth year of the Fine Art program at Queen's University. Her work explores internal mental processes through a personal lens. She has previously exhibited at the Union Gallery as well as at the Queen's Faculty of Education juried annual exhibitions and the Juvenis festival.

Distant Memory depicts the Vltava River/Charles Bridge in the year 2012, which is when Parr visited Prague with her family and took this photo. The message behind her artworks is personal, and holds a great deal of importance to her. The goal of her work is to save her most prominent good memories on large canvases and in bright colours, in an effort to keep them clear in her mind. She chose to paint photos she's personally taken to solidify the place they hold in her mind and in her home, working to ensure they never get lost in boxes or crumpled beyond repair.

Bronwen Parr is a visual artist and teacher in her fourth year of the Concurrent Education/Fine Art program at Queens University. Her work is primarily focused on oil painting and realism, with specific dedication to various landscapes. Bronwen often explores the concept of memories—choosing to paint photos she has taken on her travels or near her home. She has chosen to explore this concept due to the abnormal amount of times she has moved and lost photos as a result. Her hope is to enlarge her most prevalent memories on a bright canvas to keep them safe.

Wonderland aims to convey the brightness in our world and base it on lived experiences that focus on three aspects - human connection, adventure and play. By pulling from his own experiences at summer camp and tagging the simple things that are good, Pearse believes his art can be a symbol of sentimentality, preservation and upholding of family/heritage/ideals. He wants his work to be an example of permitting oneself reminisce in fond memories. He thinks this is one way for his art to make an impact on people on a personal level and invoke happiness, inspire adventure and remind people of the strength of human connection.

Tyler Pearse is a painter, printer and photographer in his fourth year of the Concurrent Education/Fine Art program at Queen's University. Tyler's focuses in art have been on the simple and often forgotten things in life that create lasting memory and pure joy, emphasizing human connection and adventure. He grew up in Huntsville Ontario where his family owns and operates a summer camp for kids. This is where lots of his inspiration comes from. He hopes to become a high school art teacher.

Susceptible to Sneaking explores concepts regarding viewer implication and the normative form that female figures are displayed in. In this piece, she decided to do a figure study that had personal value, where the subject is based on her own body. That said, she does not refer to this piece as a self-portrait. The work is meant to function as a critical observation of the creases and folds of skin, the body as a point of visual captivation regardless of the shape or size, and a sense of comfort and beauty that too often gets tarnished by societal pressures of idealism. This piece represents her own commentary on how the body can be captivating for more than its shape, but rather for the intricacies of its intention and its envelopment of elaborate systems that lie underneath the skin.

Ailene Zamora is a visual artist in her fourth year of the Fine Art program at Queen's University. Her work exhibits concepts of political interrogation and captivation of intention behind bodily forms. These themes are displayed through various media such as oil painting, textile work, and small scale 3-dimensional sculpture. Ailene has previously exhibited as a featured artist in the main retail space of the Queenston Mile Winery in Niagara-on-the-Lake.

Lily Le is a cyborg machine disguised as a visual artist in her fourth year of the Fine Art Program at Queen's University. Their work utilizes various media to investigate the relationships that intersect between digital spaces into physical reality and vice versa. Her other interests lie in curating, art history, and writing artist statements. Lily has previously exhibited at the Union Gallery.

Jung-Ah Kim is a filmmaker and programmer from Seoul, South Korea, currently in the first year of her Ph.D. in Screen Cultures and Curatorial Studies at Queen’s University. Before she came to Queen’s, she received her MFA in Documentary Media from Northwestern University (2019) in Chicago. Her films have been shown in various venues and festivals across North America and South Korea, and she organized regular Korean film screenings in Chicago as well as programming for film festivals. Currently working as a curatorial assistant at the Union Gallery supported by a Research Fellowship from her program, she wishes to continuously engage with curatorial practice as well as producing her own work.